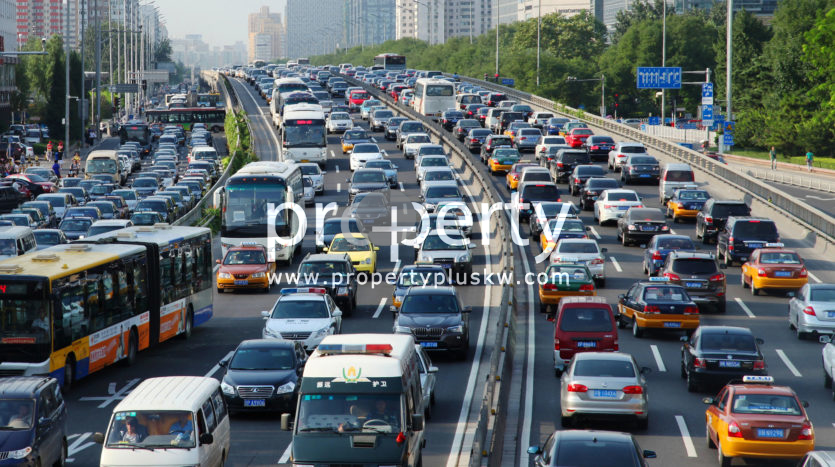 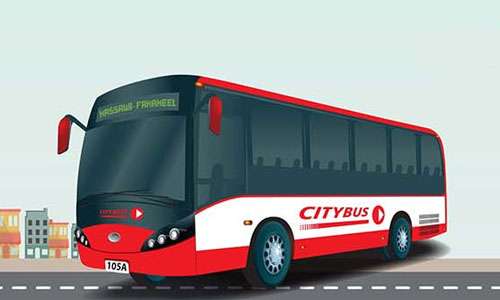 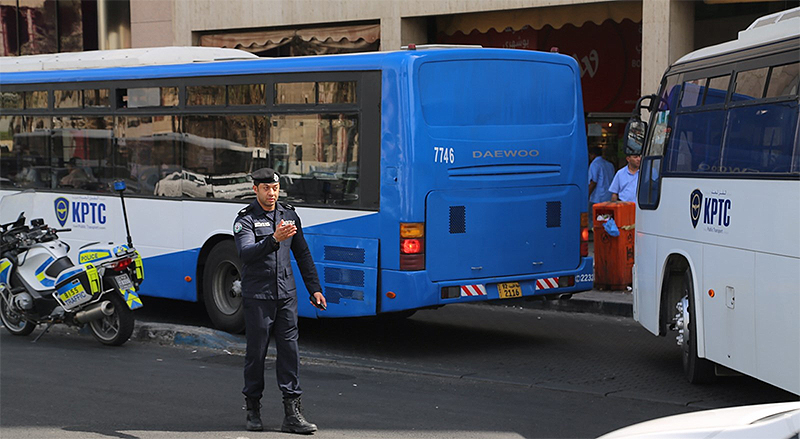 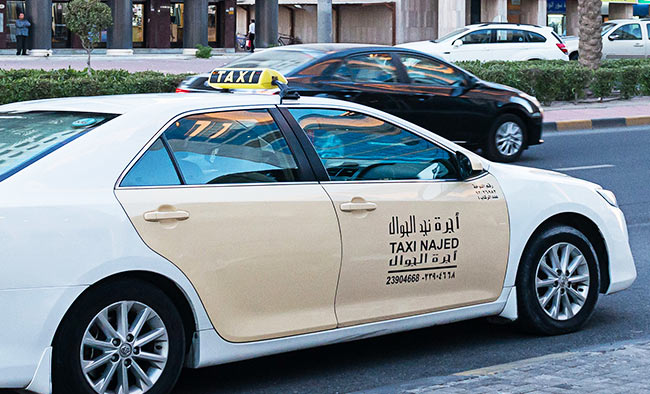 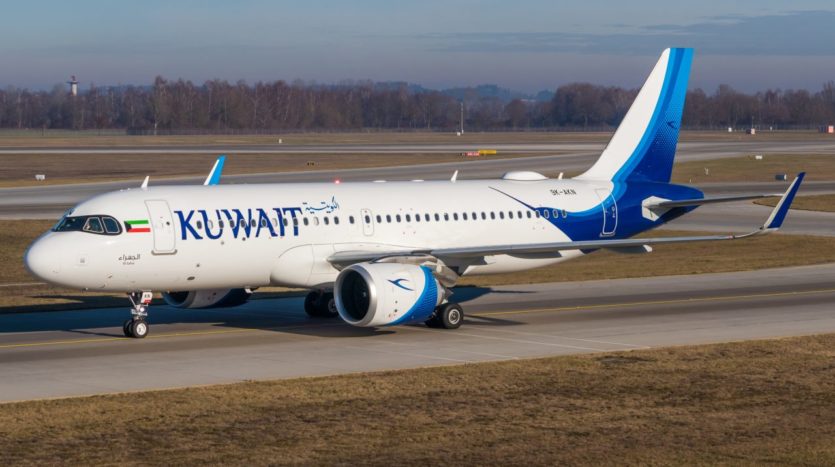 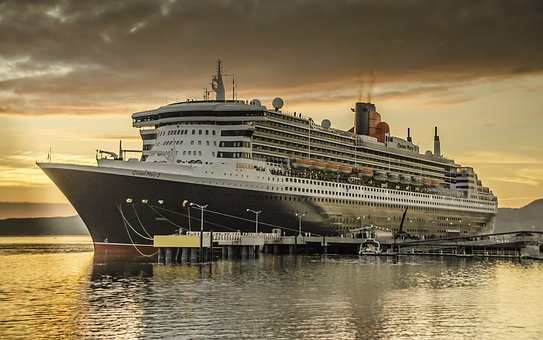 Kuwait City has no shortage of transport choices for both visitors and business travelers. Although there are no trains, Kuwait has a well-developed road network and public transport is restricted to buses and taxis. Plans are in the process of constructing a railway network in the future, but at present, buses, cars or taxis are the only public transport means available in Kuwait.
It’s easy to get around Kuwait, given you know your way, and the entire Metropolitan Area, laid out in a conical grid-like pattern of main roads, feeder roads, and local highways. Moreover, most road signs are in English and Arabic but in several streets there are no signs posted.
Traffic here, however, is a major problem, as the number of vehicles on the roads increases by the year, and the government is seriously addressing this issue by upgrading the roads and expanding transport links to include a quick transit network along the coast.

Public Bus Service
The local bus system in Kuwait is cheap and extensive, but, is rather designed for convenience of local residents than tourists. Therefore, the routes usually do not often coincide with places of tourist interest. But, a 10-minute walk either side of the bus stop is not a problem. You can pick up a bus timetable from the main bus station in the city centre.
The two state-owned public bus companies are KPTC (Kuwait Public Transport Company) and the City Bus. Their routes cover most of the densely populated areas in Kuwait. Buses in Kuwait are generally safe and reliable, and run approximately every ten minutes. They are air-conditioned, with fares of approximately 250 fils per ride, depending on distance travelled. The front seats in a bus are usually reserved for women.
The government-owned Kuwait Public Transport Company (KPTC) has a monopoly over public bus services. It boasts about a more reliable transportation network throughout the country, offering most economical means of moving around Kuwait. It has more than 30 routes in operation, and covers the Metropolitan Area. It offers more than 400 buses, both ordinary and air-conditioned buses. There are season tickets available for frequent travellers from main bus stations. KPTC also operates international bus services to cities like Saudi Arabia, Bahrain, Jordan, Cairo and special tours to Mecca.
The City Bus Company enables transportation services round the clock. The company has developed a well-advanced transportation network stretching throughout Kuwait. The buses deployed are modern, air-conditioned and equipped with entertainment amenities that ensure passengers enjoyment when travelling. The buses are all linked through a wireless tracking and communication system.
The ticket rates start from 200fils and can vary depending on the distance of travel.
For more information and service updates, visit mailer.citybuskw.com

Private Bus Service
One of the popular and major private companies offering bus transportation services in Kuwait is the Kuwait & Gulf Link Transport company (KGL TC). It specializes in transporting individuals, bulk liquids, manufactured goods, chemicals, petroleum products, raw materials and several other products and equipment.
The company also comprises buses, equipped with modern means of comfort and entertainment. The fleet includes trucks, tankers and refrigerated trailers, driven by a team of professional drivers. All buses and trucks are linked through a tracking and communication system.
For details, visit the company website http://www.kgl.com/

Taxi / Cab Hiring
Instead of purchasing or renting a car, majority of expatriates depend on taxis for getting around on daily basis. In Kuwait, taxis are reliable, and prices are usually reasonable. Once you get to know a driver, you can also contact him personally when calling a taxi.
The hire rates are sometimes a combination of time and distance, with first 150km of the day free. The charges are based on 24 hours a day and hourly charges for excess hours. Special weekend rates are also available. Insurance may also be included in the hire rates.
Usually, taxis in Kuwait do not use taximeters. A fare is usually agreed before getting onto a taxi. Most taxi companies have zone-based fares. There are also several unofficial taxis roaming the streets of Kuwait. But, their fares are not subject to any regulation, and hence it is better to avoid them.
There are several types of taxis – Call taxis, Wanettes, and Orange cabs. The call taxis are radio controlled with 24-hour cabs which can be booked through a telephone call to the company’s office. The fares are distance-based, which can get expensive when trips extend across the area boundaries. Fares are also considerably high at night times.
Orange cabs are of two types. The first type will operate from ranks where they pick-up several passengers going to a particular area, and then follow set routes. The orange cabs also operate from outside the main hotels and the airport, where they can be hired without sharing. The fares are negotiable.
The Wanettes (pick-up trucks) with red number plates are authorized to transport goods and to carry passengers accompanying goods.
The vehicle number plates are coloured white on private cars, blue on government vehicles, reddish orange on commercial vehicles and sort of dun colour on military vehicles.
There are plenty of car hire firms in Kuwait. To rent a car, several expats take advantage of the cheap gas prices in Kuwait, which would be exceptionally expensive back in their home countries. Most cars are equipped with heavy duty transmission, a large radiator and powerful air-conditioning system.
Useful transportation booking Apps to get around in Kuwait
Although public transportation by way of buses is always available in Kuwait, another good option for your point to point travels in the country would be the use of taxis through ride-booking apps. Although Uber has not entered into ‘kuwait yet, there are some other common ride-booking apps available in the country:

Q8 Taxi
It is one of the earliest ride-booking services available in Kuwait. As this app uses the local street taxis, it is pretty affordable too. Therefore it is ideal for those looking for a convenient no-frill cab ride.

Careem
This is closest to Uber that you can get in Kuwait. If you are familiar with Uber, you can easily work through this app. Careem also helps you in scheduling airport rides with its reliable and extensive private car network.

Grand Limo
This costs you more than your regular street cabs, but, if you are looking for a sleek and fancy ride, then the price may be worth it, as you are given a VIP treatment with polite and professional drivers, clean and stylish vehicles, with unique luxury and safety features and free use of iPad, open access to Wi-fi for your on-board entertainment, a built-in camera system to monitor your ride and your loved ones throughout, and convenient payment terminals within the vehicle for card transactions in case you require cashless transactions.

Air Transport
The Kuwait International Airport is located in Farwaniyah, about 16.5km from the centre of Kuwait City. Those arriving in Kuwait by air will land at the Kuwait International Airport, the only airport in the country. Kuwait International Airport is considered one of the safest airports in the world and is the only civilian airport in the country.
Kuwait Airways, the national carrier of Kuwait operates flights from here to several destinations including Western Europe and across the Atlantic to New York City. There is also the regional discount carrier Jazeera Airways, while many also prefer to fly with United Airlines or Thai airways.
The airport has two terminals, the Old Terminal One, used for short-haul passenger flights and freight with nearby cargo handling amenities, and the Terminal two which is the main passenger terminal. Built in the shape of an aeroplane, all long distance flights depart and arrive here. It includes all necessary passenger amenities including automatic baggage handling, bank, post office, restaurants, buffets, hotel reservations, airline ticketing, Mosque, shops, express courier centre, transit hotel, duty-free area and a transit zone. The airport also includes shops, car park, restaurants, airline offices, and more.
Kuwait also plans to open T2 passenger terminal in 2023.
For transportation from the airport, there are the airport taxis and airport limousine services. Airport Taxis are white and green in colour, and have fixed fares printed in the window of the car for all areas of Kuwait. The taxi rank is on the left when you come out of the airport arrivals hall.
Airport Limousine service can offer transport from the airport to anywhere you wish to go to in Kuwait. You may contact them at their hotline 1802202 to book the service. However, they are more expensive than the normal airport taxis.

Sea Transport
The Kuwait Ports serve as window for the State to external world, and contributes to the economy of Kuwait. Kuwait has three main ports namely the Shuwaikh Port, Shuaiba Port and Doha Port.
Shuwaikh Port is the main commercial port in Kuwait. Shuaiba Port is the second major port and it contains platforms for handling commercial traffic, containers and oil products platform. Doha Port is the third port, which is a small coastal port mainly used for crafts, barges and small ships sailing among Gulf countries and for performing coastal services.
The Kuwait Public Transport Company (KSC) offers sea transport services to Failaka Island everyday. Further, special tourist trips are organized as agreed upon previously. The boats and small ships undergo periodic maintenance to ensure efficiency at work. The Company also delivers sea cargos of goods, equipment and cars.
Kuwait and Gulf Link Transport Company (KGL TC) os one of the companies specialized in sea cargo and transport services. It has established a branch specialized in sea cargos and transportation within Kuwait. The company also plans services to reach the whole world.